You can review a few events from her timeline below.
The great history of Delta Queen in fact start in Scotland, where she was born as a twin sister to the Delta King (from 1924 to 1927).
They were shipped in pieces and assembled at Banner Island shipyard in Stockton, California.
If we look at the average cost of $75,000 for boats at that time. It can truly be said that she was the Queen from the very beginning, her final cost was $850,000.

June 26, 1938 – Delta Queen and Port of Stockton raced 17 miles from Sacramento down river to Clarksburg. Delta Queen carried 900 passengers who paid 50 cents each. Port of Sacramento won by a whisker.

April 1963 – Delta Queen and Belle of Louisville race and it is a publicity success.

A short 4 minutes video describes the first Great Steamboat Race between the Delta Queen & the Belle of Louisville in 1963.

September 1971 – Delta Queen contracted to carry U.S. mail and has its own postmark 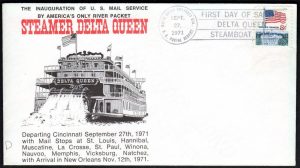 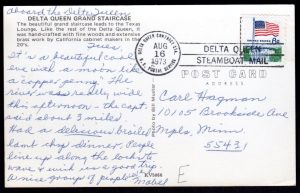 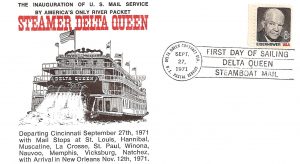